A message from the Practice Administrator: "Hi, I am Yolanda Perez-Suchil, Manager of Dr. Nicolas Xydas Women’s Center P.A., since 2005. Our team is committed to providing you with quality and personalized care and my pledge to you is that you will be treated with professionalism, honor and respect. Please feel free to contact me with any questions or concerns. My number is (713) 695-0002. Thank you for your trust and for allowing us to participate in your care."

At Dr. Nicolas Xydas Women’s Center, P.A. we are only as strong as our staff and we are proud to employ a variety of qualified individuals. Please take a moment to get to know our individual staff members and learn how they allow our practice to continually be the absolute best at caring for your health needs.

Board Certified in Obstetrics and Gynecology

Dr. Nicolas Xydas founded the practice in 1997.  He earned a B.S. in Biology from The University of Texas at Arlington (1983-1986), where he received several academic achievements including the William Hughes Award for Academic Achievement in Biology, the Grace G. Thorton and the Allen Saxe Health Related Scholarships. He attended Medical School (1986-1990) at UT Southwestern in Dallas, Texas and completed his residency at Tulane Medical Center in New Orleans, LA (1990 -1994), where he received The Excellence in Research Award. Dr. Xydas is Board Certified in Obstetrics and Gynecology and has delivered thousands of babies and provided care to thousands of women during his career. He speaks English, Greek and Spanish. 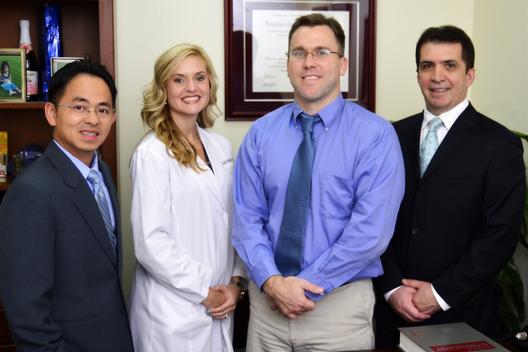 Board Certified in Obstetrics and Gynecology

Dr. Duong graduated from The University of Houston with a B.S. degree in Biochemistry. He attended Medical School at U.T. Southwestern in Dallas, Texas and completed his residency at Tulane Medical Center in New Orleans, LA. (2002-2006), where he received The Hiram W.K. Batson Award for Outstanding Residency Performance. Dr. Duong is Board Certified in Obstetrics and Gynecology and speaks English, Vietnamese and Spanish.

Board Eligible in Obstetrics and Gynecology

Dr. Ross graduated from The Brigham Young University in Utah with a B.S. degree in Biology (2004). He attended Saint Georges University School of Medicine in Grenada WI and completed his residency at Newark Beth Israel Medical Center, NJ (2008-2012). He was elected outstanding resident of the year (2010) and received The Ava Harris Nursing Award and The Dr. Kenneth A. Kappy Award for Excellence and Commitment in Fostering OB/GYN Education of Medical Students (2010). Dr. Ross speaks English, Spanish and Portuguese and is Board Eligible in Obstetrics and Gynecology.

Our Hours
View on Mobile